Our colleague and dear friend, Distinguished Professor Emeritus Eldridge Moores, passed away on October 28th, 2018. Eldridge's vision, leadership, and compassion were the soul of this department. His family and his many friends and colleagues here at UC Davis and around the world are grieving from this untimely loss

Eldridge’s career spanned nearly 60 years, from the birth of plate tectonics to controversies surrounding fracking. He possessed an extraordinary ability to see existing data in completely new ways, leading to an impressive and enduring legacy in the earth sciences. His influence also extends well beyond academia through his efforts to improve geoscience education, elevate public awareness of geology, and promote diversity in science. He and his wife, Judy, embodied the principles of community and broadly shared their passion for the arts and sciences with all.

Eldridge was born on October 13th, 1938, in Phoenix, Arizona. He received his B.S. from the California Institute of Technology (1959) and an M.A. (1961) and a Ph.D. (1963) from Princeton University. His postdoctoral work on the Vourinois ophiolite complex in northern Greece led to a major breakthrough in tectonics.

Eldridge was the first to identify ophiolites — peculiar sequences of igneous and sedimentary rocks exposed on land — as remnants of ancient oceanic crust. Eldridge focused on this topic throughout his career and was recognized as a world leader in understanding the origin and significance of ophiolites throughout Earth history.

In 1966, Eldridge joined the faculty of the UC Davis Department of Geology (now Earth and Planetary Sciences). His research focused on tectonics, structural geology and petrology including: ophiolites of the western United States and Tethyan belt, geology of Greece, Cyprus, and Pakistan, and tectonic development of the Sierra Nevada and Alpine–Himalayan systems. Closer to home, Eldridge worked extensively in the Feather River-Lake Almanor region, where ophiolitic rocks, intrusions, and complexly folded strata record a series of accretion events.

His work on the complex Phanerozoic record of accretion and assembly of the North America margin was famously described by his close friend John McPhee in Assembling California. Eldridge was also among the first to appreciate effects of supercontinent assembly and dispersal upon sea level and the evolution of life. He proposed the landmark SWEAT hypothesis (Southwest U.S.–East Antarctica) for the configuration of an ancient supercontinent, subsequently dubbed Rodinia. This, his most widely cited paper, broke an important barrier to understanding pre-Pangaea plate tectonics.

As a professor and chair at UC Davis, Eldridge helped develop an internationally respected department. His commitment to diversity and equity made the department an incredibly positive place to work. Though emeritus since 2003, he was a fixture in the department and was always generous with his time, advice, ideas, and perspectives from a long and storied career. He was particularly proud of the many students who passed through the department, going on to productive careers as earth scientists and as good stewards of our planet.

Messages of sympathy and memories of Eldridge may be sent to memories-of-eldridge@ucdavis.edu. If you wish to have your message included on this web page, please let us know.

He contributed substantially to the campus in many ways. While holding different roles on campus, Eldridge always kept a focus on students and their education as scientists and citizens.

Eldridge was dedicated to supporting the Geological Society of America (GSA) as a leading scientific organization promoting understanding of Earth. As editor of Geology from 1981–1987, he transformed the journal into one of today’s premier earth science publications.  He was the first science editor of GSA Today, the society’s newspaper for members, and served on the publications committee for many years. He served as GSA president in 1996, and chaired GSA’s foundation development committee for several years. He also helped expand the international division, and served as vice president of the International Union of Geological Sciences (IUGS). In that position, Eldridge helped oversee projects around the world and integrate the IUGS with the International Geological Congress.

Eldridge devoted countless hours to increasing public awareness of the importance and impact of the geosciences in society. His efforts included elevating earth and planetary science in K-12 education in California, and succeeded with the approval by the University of California of a high school honors Earth and Space Science course to qualify for UC’s laboratory science admission requirement.

A field geologist at heart, Eldridge knew there was no better classroom for teaching geology than out in the field. He and his wife Judy Moores introduced more than a thousand people to California geology through their field trips, sometimes as fundraisers for local non-profit organizations. One of the many was author John McPhee, who featured Eldridge in the best-selling book Assembling California and the Pulitzer Prize-winning Annals of the Former World. McPhee described him thusly, “Moores is the sort of person who runs up flights of stairs circling elevator shafts, because elevators are so slow.”

Eldridge used the attention from the books to highlight his opinion that we must understand our planet to persist as a society. He ended every email with a quotation from Will Durant: “Civilization exists by geologic consent, subject to change without notice.” This has become the informal motto of the department he called home.

Eldridge was a role model for all, demonstrating daily the value of integrating science with moral values, community and arts. He, with Judy, was a prominent member of the Davis community, promoting respect and care for each individual. Eldridge frequently remarked on the centrality of his partnership with Judy to his life’s work, and that he viewed his as a two-person career. Together, Eldridge and Judy promoted good stewardship of the environment, from their own backyard to the farthest reaches of the world. They hosted beautiful dinners, and they grew extra food to share with those in need.

Eldridge integrated music into his life, playing cello in the UC Davis Symphony Orchestra for 28 years and singing in the choir at the Unitarian Universalist Church of Davis. A picture of Eldridge playing cello on an outcrop in Cyprus inspired many young scientists when the photo was published on the cover of Geology. He would work on a difficult passage for cello or piano until it went just right. Then, as he said, “It’s the same feeling you acquire in science, when you achieve some real insight.”

Eldridge’s scientific legacy started with the birth of plate tectonics, and he continued to contribute fundamental advances and provocative ideas throughout his long career. He will be most fondly remembered, though, for his humility, and for the compassion with which he treated everyone he encountered. Eldridge’s efforts to improve geoscience education, elevate public awareness of geology, and promote diversity in science built a strong legacy in the communities he loved. He and Judy have also been exceptionally generous to the department by establishing two endowments designed to connect us to the world: The Eldridge Moores Distinguished Visiting Scholars Fund in the Geosciences and the Eldridge and Judith Moores Field Geology Fund. These funds bring leading earth scientists to our classrooms and lecture halls, and send us with our hammers to outcrops around the world. Eldridge’s impact will endure.

“Civilization exists by geologic consent, subject to change without notice.” - Will Durant

Moores, E. M. and F. J. Vine. 1971. The Troodos Massif, Cyprus, and other ophiolites as oceanic crust: Evaluation and implications. Transactions of the Royal Society of London 268A, 443-466.

Moores, E. M., Wakabayashi, J., and Unruh, J.R., 2002. Crustal-scale cross-section of the US Cordillera, California and beyond, its tectonic significance and speculations on the Andean orogeny. International Geology Review, 44, 479- 500.

Moores, E. M., 2011, Serpentinites and other ultramafic rocks: why they are important for Earth's history and possibly for its future; in Harrison, S., and Rajakaruna, N., eds., Serpentine The Evolution and Ecology of a Model System, Berkeley, University of California Press, p. 3-28. 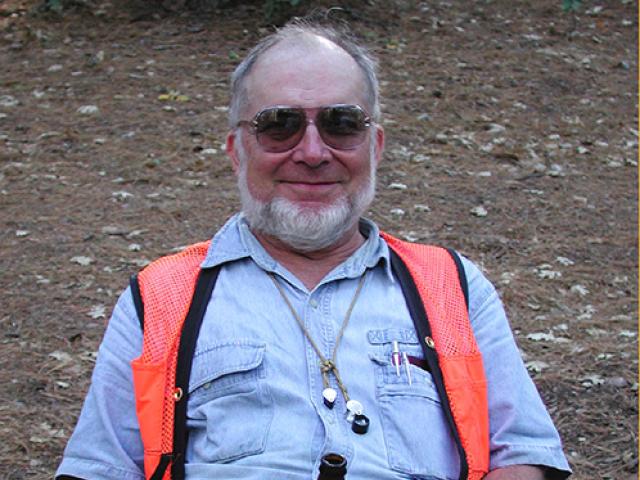 Down to Earth with tectonicist Eldridge Moores

Eldridge Moores spoke with EARTH about why he dreamed of getting a job in San Francisco, how he screwed up his first field season, and what it was like working with John McPhee.